Life Before Narcolepsy
Imagine you're in college, tasting independence for the first time in your life.  You're an awesome student, an exceptionally intelligent and hard worker with a keen savviness for social issues.  You're able to finally drive and go wherever, whenever you like.  Still, there isn't much of any time for true fun if you want to keep up your grades and reputation.  You pull several all-nighters each month just to prepare for class and exams.  You're one of those everyone expects to provide an awesome and meaningful contribution and inspiration to society.  Far beyond your physical age in level of maturity: intellectual, emotional, and spiritual, the average coed activities of your peers seem completely juvenile and unproductive to the matters of the real world at hand. 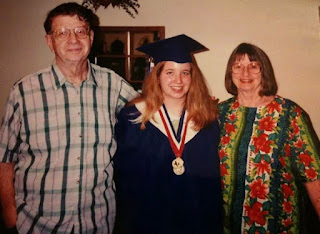 Help! I'm Paralyzed and being Bombed!
You take your first job working as a lab assistant, but your boss and coworkers always catch you often fall off you're stool in a sudden attack of sleep. You may work for only 3 to 4 hours each weekday, but you are seemingly constantly stuck in a never-ending prison of sleepiness all day long. Now, it's the year 2001, you're a Junior in college, a week after 9/11, and you still cannot fathom how someone would not only be willing to commit suicide, but also kill hundreds of innocent others who have little direct control of their government all in the twisted name of your religious beliefs.  You have nightmares each night: feeling the burning pain of fire and fear of atomic world warfare.  Many times you hear it, the intruders in your home; the whispers, footsteps, and the tinkering with your door knobs and opening windows.  Many times you see them; black shadowy figures, and feel them torturing you.  Meanwhile, you are paralyzed unable to move, speak, and terrified for your life.  What the crap is going on, you wonder as you are shaken and often literally shaking in a seemingly endless trap of terror.  No, you cannot cry out for help or run away form the stronghold of sleep paralysis and hypnagogic/ hypnopompic hallucinations.
Laughter is to be Feared
A month later you begin to feel the oddest, most uncomfortable sensation in your knees when you laugh or feel angry.  It's like you feel your knees giving out, wobbling like you're going to fall down as the sensation of pins and needles sprouts throughout the lower portion of your body.  So strange, you fret what could be wrong, but have no earthy idea what the crap could be sucking the health and livelihood of your youth from you like some demonic parasite.  It's December, and now your body often goes into a complete body collapse of conscious complete body paralysis, much like a puppet having its strings cut.  Please, you warn your family and friends, don't tell me any jokes, I will have cataplexy.  You try to explain to prepare them, but nothing can prepare you or them for the ridiculously dramatic panic they go into when witnessing cataplexy, esp. the first couple times.  They're like, what kind of fool word is Cataplexy?  You fall asleep while opening Christmas presents, riding in and driving a car, watching TV, and even during discussions.

Open Your Eyes to Narcolepsy
By this point in your hellish disaster, you discover online that cataplexy is indicative of Narcolepsy and that you have its life destroying full tetrad plus of symptoms:  Excessive Daytime Sleepiness, Cataplexy, Sleep Paralysis, and Hypnagogic/ Hypnopompic Hallucinations.  Not to mention the other lesser symptoms Automatic Behavior, Disrupted or Fragmented Nighttime Sleep, and Chronic Fatigue.  It's the finding an insurance policy that covers sleeping disorders and a doctor willing to order a sleep study that's the even more challenging problem.
Share Share on Facebook Tweet Tweet on Twitter Pin it Pin on Pinterest

Narcolepsy is like a vehicle’s failing or slipping transmission
February 10, 2020

DISINVINCIBLE On The NapCast Rising Voices of Narcolepsy Story
January 31, 2020

Why I really have earned 30 this Birthday: How Hepatica made me miss the Simple days of just Narcolepsy, Fibro, and RA
January 31, 2020